A memorial service is being held today for one of the region's most active cultural figures and one of the Lheidli T'enneh First Nation's most beloved elders.


Robert Frederick was born April 6, 1950, and died on May 4. A memorial service will be held today at 2 p.m. at Sacred Heart Cathedral. Following the service, he will be laid to rest in the Lheidli T'enneh Memorial Park. Following the interment, everyone is welcome to join the family at the House of Ancestors for a reception.
As a child, Frederick was subjected to five years of residential school at Lejac where the attempt was made to forcibly remove Aboriginal connection from all the students. In Frederick's case, he would spend his elder years building that back up, not only for Indigenous people but the broader community as well.


Frederick, along with his equally active wife Edie, was instrumental in developing and instructing a UNBC course in the making of traditional cottonwood dugout canoes. In this experiential course, the students were also exposed to stories, songs, language, fishing, and other traditional elements of Lheidli life while also producing the first cottonwood dugouts in, Frederick estimated, the previous 60 years.
Frederick was a member of the Lusilyoo Frog Clan and descendant of Letrick-Cho, according to one of the course's participants Jennifer Pighin, a celebrated local artist tighly connected to both Robert and Edie.
She and Dean Marsters, with consultation help from Brent Goertz, built Frederick's casket.
"He was solid to the core, funny and caring and so many other things," Pighin said.
"It will be hard to digest this loss as we lay his body to rest but I know his spirit is strong. The strongest souls seem to be needed elsewhere. I know they're all doing great things in their own ways and holding us all so close as we hold them."
Frederick's cultural influence was applied in a number of ways and locations around the territory.
Master carver Ron Sebastian noted that Frederick was part of the carving project on the doors of the Tourist Information Centre, for example.
In 2005, Frederick was key to the Indigenous programming at the Historic Huble Homestead. He was a leader in the construction of the Lheidli T'enneh Fish Camp exhibit there, close to where one had been in centuries previous.
"Robert was at the heart of that project, not only as one of the elders with whom we consulted, but as the carver of the dugout canoe that is still on display in the exhibit today," said Krystal Leason, executive director of the Huble Homestead/Giscome Portage Heritage Society. "From what I understand the canoe at Huble Homestead was the first one he led the carving of. He has, of course, done many since then and we are proud to have one of his pieces displayed at the historic site."
Leason said he and Edie were also closely consulted in 2011 on updating the fish camp display.
"I remember him patiently answering our questions and despite seeming quiet he had a great sense of humour," she said.
"Robert was a wonderful advocate for the Lheidli T'enneh's history and culture. He leaves an incredible legacy for his nation and we were fortunate to have learned from him."
2011 was also the year Frederick was commissioned to create a permanent art installation for the Spirit Gate Project alongside Veterans' Plaza at City Hall. He carved a dugout with the story of Astace And The Salmon that was replicated in fiberglass and mounted in front of City Hall with a bronze plaque for passersby to always see.
Tracy Caolgheros, CEO of Exploration Place Museum + Science Centre, said their institution, too, was indebted to Frederick.
"In a very practical way, Robert was instrumental in the development of the Hodul'eh-a : A Place of Learning Gallery at the Museum, but his impact on the deepening of the relationship between his people and the broader community goes so much further," Calogheros said.
"In a culture where history and knowledge is primarily oral, Robert was a compelling storyteller. He held the wisdom of his ancestors and shared it willingly with those who cared to listen. We are losing our region's elders but not before we have had the chance to know them, to hear them, to learn from their lives and experience. I am going to miss Robert Frederick. I had the privilege of laughing with him and listening to him. We have captured some of his love of life at The Exploration Place but never enough to replace his twinkling eyes. We mourn with his family, his friends and his nation. Snachailya."
His dugout canoes can be seen around the community, including one at UNBC in the First Nations Studies Department and another at Nusdeh Yoh Aboriginal Choice School.
There is a resurgence in learning Lheidli T'enneh culture by a younger generation numerous and motivated. Many of those traditions were nearly lost and some still in danger, thanks to colonial pressures to eradicate it. Frederick was one of the strongest bridges over that impasse to connect the new community with the old ways 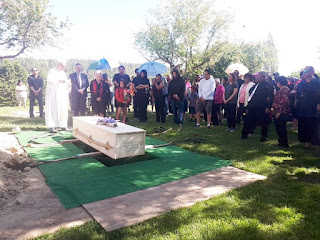 I had not expected to see this in the park, I think that many people do not realize that this is still an active cemetary. Thanks to the family for providing me this picture so I could see the final picture of the box. I only consulted on the design. I had no involvement of the building as it was not neccary. It confirms my belief that my philsophy is "less is more". Just provide enough assistance so that people can connect with their own agency and actively engage in the instrumental process of grieving by the building of the box. Then in time this will become a personal and collective positive anchor when the family experiences struggle within their grief journey.
What a beautiful gathering and final resting spot. I didn't feel like it was appropriate to crash the gathering. 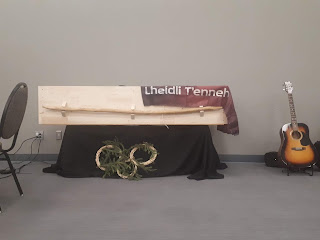 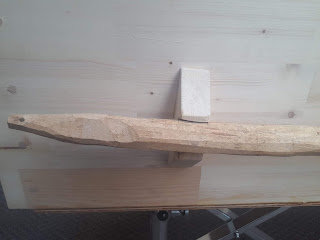 The organic nature of this box was expressed in the detail. Obviously created by a seasoned carpenter and much nicer than I could imagine as a "backyard wood butcher"
Posted by Mystical Quaker at 6:24 AM No comments: